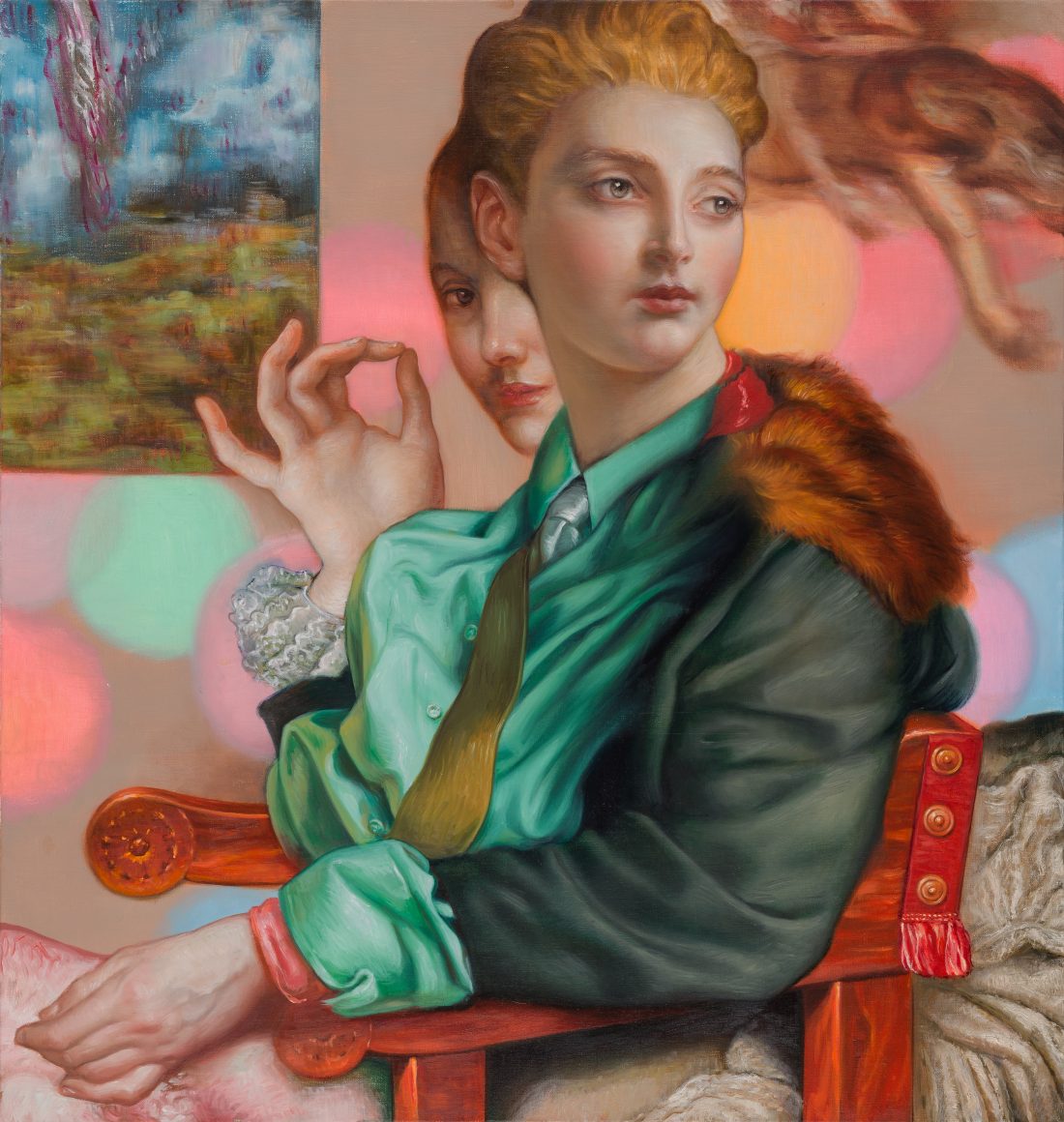 “My work functions as a kind of personal memoir, drawing from memory, desire, and dreaming. It’s my response to life, to bear witness, while operating somewhere between private confession and public entertainment. I borrow images from my own personal stash—images of family and friends, cinematic/TV culture from the 1950s and 60s, or other paintings, photos, vintage books. For the last decade in particular the work has mixed aspects of painting with cinema—its personae, projective nature or use of montage, etc… as a way to suggest some kind of complication or disturbance.”

Jamie often gives himself projects. He works similar to how a director works by hiring actors, a crew, etc. His most recent work, Niagara Series, draws from an array of sources including American Luminist and The Technicolor films of the 1950s. He draws aspects of his favorite films from that period into his work, such as Douglas Sirk’s All That Heaven Allows, Hathaway’s Niagara, and Leone’s Once Upon A Time in the West. From a contemporary perspective Technicolor’s overly saturated color in those films seems to embody the anxieties of postwar trauma, and societies striving for conformity, prosperity, peace. In Hathaway’s film Niagara, he essentially takes the ‘Honeymoon Capital of the World’ and turns it into a crime scene. Niagara Falls, recognized as one of the grand, natural wonders on the American landscape, and elevated to iconic status through a multitude of luminous American paintings by Church, Bierstadt, Inness, and others, is transformed into what Adams believes to be the ‘monster’ in the film—the American equivalent to Japan’s Godzilla– a more sublime sense of catastrophe or dread…much more palatable for an American audience.

The earlier jeannie series (2005-2012), was a group of black and white paintings based on a black and white film– Jean-Luc Godard’s French new wave films, Breathless, released around 1960. “I was initially drawn to Jean Seberg’s character in the film, and the wonderful ambient light in her bedroom apartment where monochromatic folds of flesh, and bed sheets and cotton clothing merged into one continuous surface. Jeannie kept changing though. For a while she was everything to me—the reason to make the next painting. It’s because she seemed an empty vessel that I thought I could fill with my own ideas, memories, wishes. And she could play any role–the surrogate, model-mother, furtive lover, ephebic male, the muse, youth…the artist. At the time I wanted to belong to this filmic space; to settle down, set up shop and make something. Initially the painting’s black and white surfaces were suggestive of early film technologies or a painting’s under layer of grisaille. The painted figures, with their curvaceous volumes, additionally began to take on the appearance of Neo-Classical sculpture, semblances of marble statuary.”

Jamie creates paintings based on what he wants to see. For him, it is always a negotiation between idea, the visual experience, and manipulating paint matter. While many of his paintings begin in an organized fashion, they usually slip into chaos. Some characters that begin as one gender sometimes end up burlesquing another; others added are eliminated; scenes come and go. Characters are made to ‘fit’ into the painting. “I construct them in relation to the frame and other elements within it, and as a story reveals itself.  And certain aspects of the body may become accentuated in order to highlight particular qualities: a torque of the hip, iridescence of flesh, a hand gesture, attenuation of the sternal notch or canopy of the chin, etc…I suppose this is my theatrical experiences coming into play….How the painting at a certain point needs to assert itself, make its own demands, project to its own audience. One move affects the need for another and then another and so on.”